Top of his class (year 5) was Reuben from Hadrian Academy. 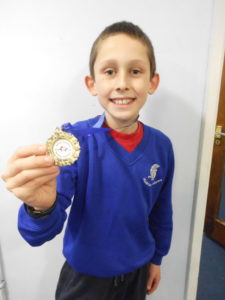 Gillian Hanson, his teacher and orienteering coach, comments:
‘Reuben took up the sport of orienteering two years ago as an extra activity at Hadrian Academy. Whilst attending the weekly after-school orienteering club, Reuben was taught the skills of being able to read an orienteering map and be confident in using basic navigational techniques. To qualify for the championship event, Reuben had to have competed in at least three orienteering events at the appropriate standard for his age.
At BSOC, he successfully beat a field of over 30 other competitors from schools around the country. With a winning time of 10 minutes and 40 secs! We are all so proud of him showing a good example of Hadrian Academy values, resilience and determination. WELL DONE REUBEN.’
Another medal winner was Issy from St Albans High School who was a close second in Year 6. Her time of 10 mins and 57 secs left her just one minute behind the winner. This of course follows on from Issy winning the HH Club Championships at Wendover Woods on 10th November.

Clearly with Reuben and Issy we have two more Happy Herts juniors to look out for.  WELL DONE TO BOTH OF YOU.

Black Park:
Thanks to Gillian Hanson and Ray Barnes for map and photos