From 20th to 27th July, Hannah attended a training camp based at Templar’s Park, a large scout camp on the banks of the River Dee close to Aberdeen.

This was a select camp for the top M/W16’s, with 18 junior attendees chosen from the Regional Squads throughout Great Britain. It is organised and managed by JROS (Junior Regional Orienteering Squads).(www.jros.org.uk) .

This summer I attended Deeside in order to improve my orienteering and make new friends. The camp ran from Saturday 20th July to Saturday 27th July and it ended up being one of the best weeks ever.

On the 20th when I finally got to the accommodation after a long day travelling, we started with a warm up before doing a micro sprint around the few buildings we were staying in. During the warm up to make it more fun we had eggs – we had to say a name then throw it at that person. I didn’t like this part as I was scared of the eggs. After this we began the sprint. As there were so many controls and pretty much everyone mis punched, instead of disqualifying everyone every time they got a control wrong or missed one you got 30 seconds added to your time. I made 6 mistakes so I had 3 minutes added. However, with the 3 minutes added I was only just over 8 minutes and ended up coming 2nd out of all the athletes. I was very happy with this as I actually beat all the boys. 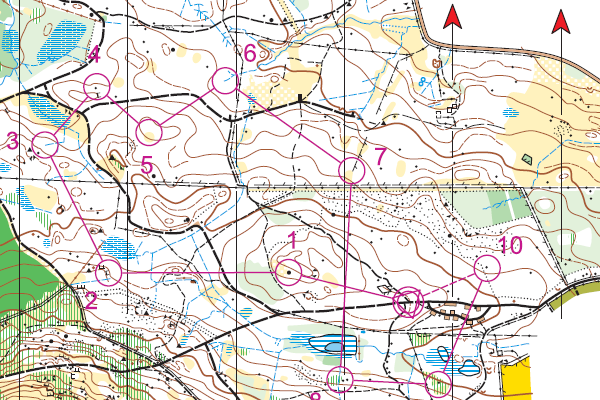 The next day we went to Scolty and after a huge climb up a hill we made it to the start and began that day’s exercises. I started off with a quite short course to just get warmed up. I didn’t make any major mistakes but I didn’t do it perfectly either. After a few more exercises and lunch we did a pairs exercise which took us down the hill and back to the minibus. I quite enjoyed this as it was all downhill.

The next day we went to the sand dunes at Balmedie. I enjoyed this as I really like sand dunes. I started off with a type of exercise I’d never done before, the control circle was blank and when you got there you had to decide which one of the controls at the top of the map it was. It was actually a lot harder than I thought it would be. Next I did a talk-O with a couple of other girls which was really fun. Then that was followed by a first leg relay practice course in which we all started at the same time but the courses were gaffled.

On Tuesday we went to Glen Dye. I’d never been to Glen Dye before but it’s actually now one of my favourite areas. It was good to get some practice there as well as that was where the tour champs were going to be on the last day. The next day was a rest day and we went to Stonehaven Lido. The rest of the girls and I just sat on the edge as it wasn’t a very nice day. After that we went to get ice creams. Once we got back, we competed in the sprint champs with the added ‘tape town’# to make it a bit harder.

The next day we went to Coull. I started with a long legs map memory. This was really hard as the only thing that had been left on the map were two contours so I only had them to work off for the nearly 1km legs. After that I did a short control pick to just practise my bearings.

On the last day, we went to Glen Dye for the tour champs. I started off 4th from last girl. The first half of the course was meant to be a middle style and the second half was more like a long. We were told prior to the race that there would be a middle winner and an overall winner. My aim for the race was to try get on the podium for at least one of these. I started off quite well and managed to get to number 5 without making a mistake. However, at 6 my bearing was a bit off and I lost about 30 seconds. This then made me run faster to try catch up the time. This worked well until number nine which was the super long leg. I think it may have been the longest leg I’ve ever done. The leg started off really badly and I ended up going off the map. I then relocated and found myself on a path which actually took me quite far on the leg. I then reached the huge hill which the control was on the top of. I began to get a bit worried as I hadn’t seen anyone in a long time but I carried on anyway and I was 100% sure I was in the right place. Near the top I found Holly who had started 2 minutes before me and I’d overtaken her at 4 but then lost her when I made my mistake. We looked for 9 together and it ended up being a lot further up the hill then we thought. Then finally after 48 minutes we found the control. We then did the next control together then I lost her again. The rest of the course then went smoothly. I got to the finish not expected to have done very well. However, once I downloaded I was told I currently had the quickest time. The other 3 girls that started after me came in and I soon realised I had won. As well as this I had won the middle race.

Overall it was such a good week and if anyone gets the opportunity to go, I would certainly recommend it.

# This is the term used when tapes are used to simulate an urban (town) environment and to designate buildings and routes in order to make route choice more complex.