“On 1 April, one hundred years since the formation of the Royal Air Force, a specially designed commemorative baton set off on a journey around the UK and abroad. See “the RAF site” for the background story.

As part of its journey, the baton, along with Jay Ferguson and Kurt Lee from RAFO, took part in our Street-O event around Harpenden on 3rd July. Kurt found that holding the baton while also trying to navigate and write answers proved tricky – but still did OK!

We’re very pleased that we were included in the RAF’s celebration – despite the baton relay being based on an orienteering challenge I believe that this HH event was the only orienteering event featured over the 100 days.

Here’s a couple of pictures: 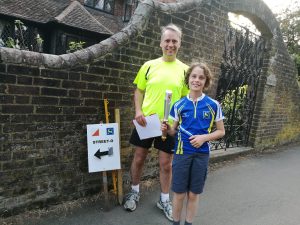