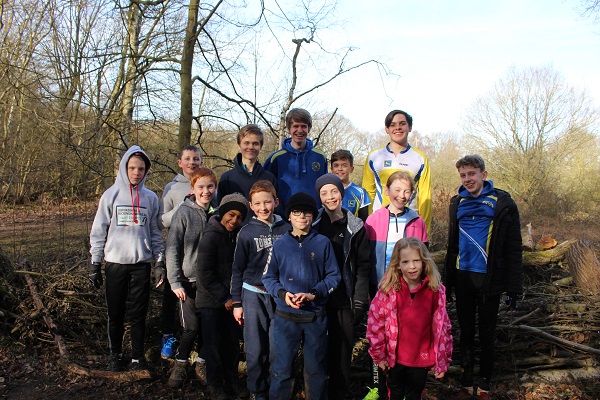 Junior training in the spring half term can always be a bit of a worry – will it rain all day or perhaps even snow? But once again Mardley Heath served up a beautifully sunny day.

18 juniors turned up at the Mardley scout hut for a day spent amongst the lumps and bumps of the area. For many it was their first time using an area with so much contour detail and so it was no surprise that after a brief introduction from Frances we divided into three groups, depending on orienteering experience, to consider the detail of map symbols, control descriptions with a great deal of focus, for the older ones at least, on contour interpretation.
Frances’s and Susan’s groups started the day by spending an hour in the hut recapping and extending their general orienteering knowledge by playing a number of orienteering related games and considering relevant work sheets.

Meanwhile Kevin and his group had already ventured into the sunshine and were busy interpreting the contours of Mardley on maps where the path network had been removed. A further complication arose when it was realised that someone had also removed (cut down) the thickets so that the group were having to rely solely on their contour interpretation in order to navigate their way round the area.

By mid morning all three groups were happily squelching their way around the area – with no noticeable side effect, before first Kevin’s group retired to the hut to review maps of the areas that will be used for this year’s JK International festival on Cannock Chase.

Soon everyone was back indoors to enjoy a rest and lunch before the afternoon session.

After lunch we moved to north of the road for a hotly contested ‘Odds and Evens relay’ in which all the juniors took part. With five teams vying for first place there was much effort put into minimising the mistakes.

Congratulations then to Tegan, Rory and Evan for coming out on top!

Thanks to all the coaches Janet, Gill, Frances, Kevin and Susan; to the junior coaches, Evan, Alex, Josh and Dominic and to Roger for arranging the use of the hut and the area.  And if next time we can have the same weather again that would be just fine!