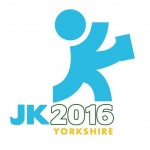 The JK took place in Yorkshire over the Easter Weekend and the Club was well represented in both the individual and relay competitions.

At the sprint event at the University of Leeds, Janet Rosen won W60, Daniel Gardiner was 3rd in MOpen, Angus Harrington was 4th in M16, Helen Marsden was 5th in W40, Sian Mitchell was 7th in W35, Alison Harding was 8th in W55, Kevin Fielding was 9th in M45 and Alan Rosen was 9th in M60.